http://egiuliani.wordpress.com/
Posted by EJR at 7:28 AM No comments:

UW Campus Construction to be Finished as early as Fall 2237

In a joint statement issued by the chief contractors of Madison’s three major construction companies: J. H. Findorff & Sons, CG Schmidt, and Terra Construction, the tentative date of completion for all University of Wisconsin-Madison construction projects has been set for the Fall of 2237.

The date could have been even earlier but due to the accidental excavation of another sacred Indian burial grounds beneath library mall and the planned bulldozing of the (Old) Union South many projects are facing extended completion dates. The remodeling of the Bielema Intergalactic Languages Center as well as the demolition of the Lucky slum developments will see the largest delays. “The Fall 2237 date is optimistic, but I think that as long as weather stays consistently at around 64-66 degrees with no precipitation and the construction budget continues to increase exponentially on September 1st, 2237, Madison may see it’s first official period of no construction projects in progress,” stated Jimmy Findorff Jr., seven time recipient of the Findorff Most Improved Worker Award and son of James Findorff, owner of the construction firm.

Regional site manager Ronald Dufour disagrees, “Every time we unearth another sacred Indian burial grounds, which happens all too often, we get a huge pile of paperwork to sort through that delays us from doing our jobs, and by jobs I mean idling around work sites, putting up fences and moving dirt back and forth, I think it'll be at least 312 years until we see a break in construction”. In related news the route 85 hover trams will still not have enough room to fit the 9:55 student crowd, or get them to class on time until at least 2581.
Posted by EJR at 10:55 AM 42 comments: 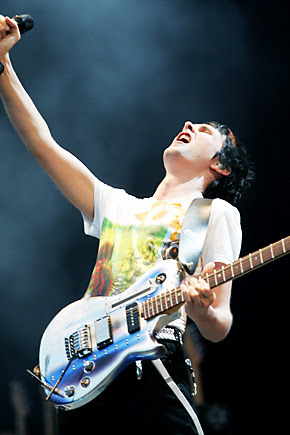 Everyone knows that pitch shifting is the shit. What's better than making Nickelback sound like Alvin and the Chipmunks on crack (not that Nickelback can get any worse. I actually probably enjoy Alvin annoyingly reflecting on his rockstar "career" than  Chad Kroeger. Also, Jake G likes Nickelback, further proving their douchiness, but that's for another post.) But I digress, pitch shifting can have uses other than making someone's song ridiculously high or low, or allowing Dragonforce to correctly play their stupid ass music (the last one is actually them playing). It can make singers sound like women.

Anyways, the best band to do this with is Muse, a band which I am only slightly embarrassed to like. Matt Bellamy's shrieking falsetto is already somewhat girlish sounding, so a little pitch shifting can go a long way. For example, Muscle Museum. The effect is less funny sometimes (the more vibrato, the more it sounds like a broken record, not Gwen Stefani, but overall I find it very amusing. Here are a few Muse songs I did: Starlight, Supermassive Black Hole. I'm far too lazy to go out and find more content/jokes/examples for this post, so y'all can experiment with this and MAKE YOUR OWN FUN! I will, however, leave you with the following thought:

My brother suggested that I pitch shift James Blunt, but instead I just played a James Blunt song from iTunes. No work needed there. If I made him sound more like a girl, my computer would explode and I would die from the flying shrapnel and pieces of "Twilight". Either that, or the universe would anti-implode or some shit and James Blunt would grow a pair.

(P.S. That link to nothing may have been a rip off of the "Saving Private Brian" episode of Family Guy)
Posted by gck at 10:02 AM 1 comment:

Here's a magical Phatality Phight for all you out there who love magic, or for those of you who love when I post about the most random things with awesome links from around the internet. If you don't like either, get out.

This Phight is between magicians Criss Angel and David Blaine. 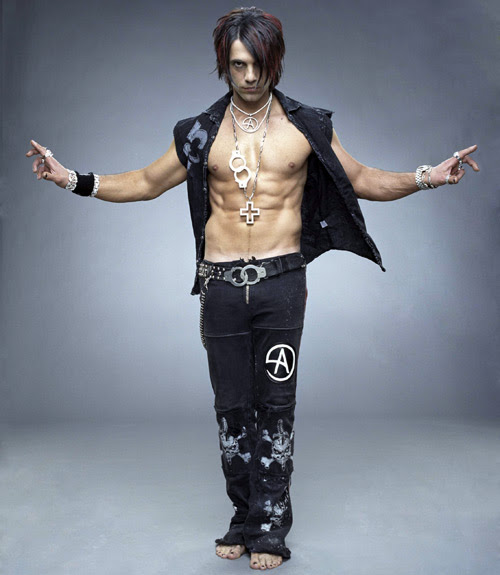 Now on to the Phight itself starting with Criss Angel. Criss Angel is pretty dang sexy, especially considering that he looks similar to ugly guy Mystery from The Pickup Artist who believes that wearing binoculars is somehow a turn on for women. Criss Angel's show Mindfreak is awesome though.
Every episode of Mindfreak is 45 minutes of Criss Angel being a modern day Jesus. Just like Jesus he can walk on water, make people believe in him religiously and grow a beard. In addition to that he has been burned alive, run over by cars, sawed in half and survived cutting himself.

Criss isn't related to the Chris who posts on this blog, in part because their names are spelled differently.

David Blaine is a crazy dude too. He usually spends his days either buried underground in a coffin, being encased in ice or talking to Donald Trump upside down.

David Blaine also brings his magic to the streets. I definitely give him street cred for that stuff. I suggest you watch this street magic video if you're going to watch any of them. WHAT THE EFF?

So who would win in a fight, Criss Angel or David Blaine?
Posted by EJR at 5:47 PM 64 comments:

This video is from Mr. Adrian Chen who is too nerdy and cool for one blog so he has two: worldoftoday.org and craigslisting, which you can find the link on the right. We link blogs so we're like best buds.

This new segment, Top Video of the Unspecified Time Period, will be what the title says it is. Expect the unexpected. Be afraid.

Anyways on to the video already:

A Review of the Entire Lower Upper Midwest (Part 1)

(This post is coming out too long, so I decided to split it up).

Many people choose not to think of it. Good for them. Us unlucky ones are forced to. Some assholes proactively defend Iowa.

They're just dumb, though.

Regardless, Iowa sucks. I can tell you that having spent a good portion of the last (the time of writing) weekend (what would have been a kickass 3 day weekend) in said state. There are so many bad things about Iowa, I don't know where to start. That is convenient, however, because I can then introduce this article more thoroughly and buy time. I spent the 31st of October through the 4th of November allowing myself to be dragged through Iowa, Illinois, and Missouri, and then back through those in the reverse order in exactly one night. I feel the need to detail just exactly why that was a terrible, terrible idea.

That brings us back to Iowa. The easiest place to start (or so I have decided) is that it smells like shit. Pure and simple. I don't know how anyone could live there. The stench never ends. I guess I could get used to it, but then I would probably kill myself from the knowledge that shit smells normal to me, and that I probably now smell like shit. But I don't think I could get used to it anyway, and here's why: Iowa has managed to make different shit smells. For some reasons, all the terrible stenches are slightly distinct. It's like the gourmet of shit smelling. I suppose the better analogy would be the Old Country Buffet of shit smelling, although I'm sure its probably less analogous and more directly comparable to Old Country Buffet itself. Whether it is a paper plant, a pig farm, a trucker, meth labs, or even Cedar Rapids' unique Quaker Oats factory shit smell (which I at first thought was alright, but then not later when I actually stepped outside), it is unbearable. Now, I know that I'm not the only one to make this point in a humorous blog post, but it just can't be stressed enough.

Funnily enough, they still try to make it livable. This brings me to my next point: department stores. I guess its to give people a way to buy the essentials/do stuff on weekends/buy too much shit from Ikea, but looking at West Des Moines is so disheartening that it makes me want not only to have an existential crisis, but to star in a rotoscoped movie about having an existential crisis. This is coming from me, a person who wholeheartedly embraces commercialism and actively defends McDonalds. It is so intensely suburban and commercialized, it could make the directors/whores of Scary Movie 4/Epic Movie/etc. cry like little bitches. Let me try to convey to you West Des Moines. Picture a booming metropolis, for example Minneapolis. Imagine it at night to emphasize the lights coming from everywhere. Now make everything a department store or restaurant chain, and fill those in with the kind of people who like going to department stores, who are either insane or my mom. Applebee's, Buffalo Wild Wings, Home Depot, Target, Walmart, and the works. All boxed into a perfect square made by roads, outside of which is flatness, suburbs, and apartment buildings. West Des Moines is a metropolis of a lame mall. Damn.

But aside from all that, using stores like that to make a place fun works just about as well as the time Billy's baseball playing cousin took steroids.

That's all for this update. Next, in what is hopefully less a boring rant and more funny, we might cover the flatness and the people who live in this literally God forsaken (God got the hell outta there right quick) place. Or whatever. It's not like anyone cares about those places. To drive the point home, I shall conclude with the bold statement I opened with.

Where do all the stupid people go?

Garage Band class. 2nd block. Enough said. This class is the academic version of the 'Tard Cart
So basically what it's all about is a small barren room filled with $5000 computer setups with a curriculum catered to idiots. And yes im taking it. I need fine arts credits, and i refuse to be the only man in a room full of ceramic -molding, paint-sniffing, jewlery-making asshats.
There are 3 types of people in this class:
1) Black people who think they can rap but they cant. They are taking this class to advance their rap careers but just plain suck at life
2) White people who think they can rap but they cant. Straight from the trailer park! Seriously, one kid looks like his face has been melted in some industrial chemo-nuclear-mechanical accident. Probably from all the inbreeding.
3) Me.
Back to the $5000 computer setups. We get MIDI keyboards, which is odd considering many of these rappers-in-training have never seen a keyboard or know what a musical note is. So one day I get our 5 day project done in 20 minutes, take off my headphones, hear some thunderous noise, and immediately hit the floor, thinking one of those Minnesota earthquakes. But HOLY SHIT thats not thunder its the sound of 23 retards randomly hitting keys on their keyboards, many sporting a sexy grin.
So the point in trying to make is, get your damn fine arts credits done early. Dont be the only senior stuck in a sea of sophomore inbreds.
Posted by Steve "Nub Pwnage" Kannenberg at 7:13 PM 6 comments: